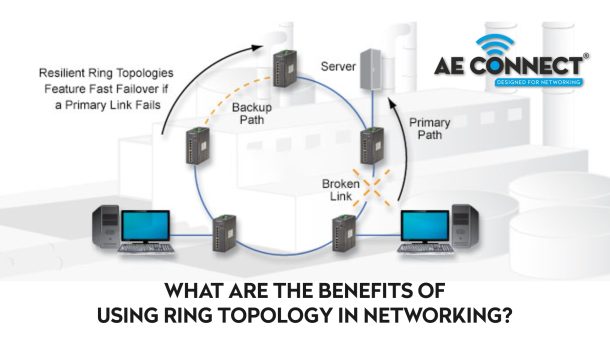 What is Ring Topology?

Ring Topology is a network configuration, where a circular data path is created between connected devices. Each networked device is connected to two other devices, suppose we symbolise one network device with a node on the circle then one node will be connected to two other nodes on the same circle. Combining all these devices in a ring form a ring network.

Packets of data travel from one device to the next until they reach their destination, in-ring network. Transfer of packets can be different in the different types of ring topology, it can be unidirectional or bidirectional. Ring Topologies are useful for both LANs (Local Area Networks) and WANs (Wide Area Networks). Initially, the ring topology was mainly used in smaller buildings, schools and offices, especially where networks were smaller. However, today the network topologies are popular in the networking world even at a larger scale for improved stability, performance and support.

To send and prevent data loss, a large number of repeaters are used in Ring Topology with a good number of nodes. Connected devices in a ring topology are mentioned as a hoop network. All these connected devices are arranged as a daisy chain. A daisy chain is a wiring scheme in which multiple devices are connected together in a ring or sequence similar to a garland of daisy flowers. This chain can be used for power, analogue signals, digital data, or a combination of them.

Ring Topologies have contributed incredibly to robust, rugged security and surveillance networks that require automatic failover for mission-critical applications. Combining Ring Topology with Industrial PoE+ Switches that are used for high-speed data, video and audio transmission at a gigabit-speed provides ultimate reliability even in harsh conditions. The use of Ring Topologies with Industrial PoE+ Switches for IP security to meet the demands for higher quality images is a new trend for cities and public safety organisations, to deliver enhanced network accessibility, scalability and cost-effective solutions. What are the advantages of using Ring Topology?

By using Ring Topology, all devices can be connected in a network as a daisy chain, data travels from one device to the next until it reaches its destination and finally back to the operations centre. Less trenching and cabling are required in Ring Topologies than alternative Star Topologies and these are simpler and cost-effective to implement. When combined with Industrial PoE+ Switches, a resilient ring topology can recover network transmission within 15 to 30 milliseconds – a superfast blazing speed, without missing even a single frame of video feed. Some important advantages of using Ring Technology are explained below:

Disadvantages of Ring Topology in Computer Network and Networking:

The major disadvantage of using traditional ring topologies was that if the ring fails then the entire network was affected resulting in the loss of all video feeds from multiple cameras in a network at once. To overcome this issue, networking experts have developed proprietary ring topologies to improve resiliency and failover time by enabling data to travel in two directions around the ring, as discussed above, it is also called bidirectional data transmission. There are a few other disadvantages of Ring Topology as discussed below:

Knowing about the effective utilisation of existing networking infrastructure is essential to utilise its full potential. Understanding Ring Topology helps us to attain the best networking experience with high-speed data transmission. Some of the most popular applications where Ring Topologies are powering the networking systems are discussed below: 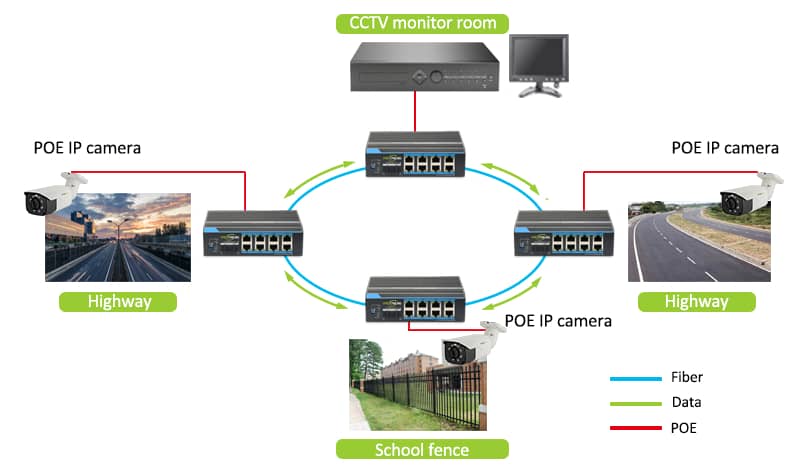 Networking solutions offered by AE Connect that will allow you to plan your suitable, efficient and secure Ring Topology:

Today, delivering power and data over a single cable has now become necessary almost in all types of networking infrastructures. The ever-growing demand for PoE+ Switches is triggered by their excellent advantage of delivering high performing networking experience along with power. High-quality PoE+ switches from AE Connect are used to power devices such as Wireless Access Points (WAPs),  IP Cameras and VoIP Phones etc. Our PoE+ Switches are also useful to reduce power consumption and increase the efficiency of the networking systems.

An exhaustive range of Commercial and Industrial PoE+ Switches is available that boast a variety of port-count, up to gigabit speed, mounting and fiber. Our PoE+ Switches deliver power from 15 Watt to 30 Watt per port, which delivers super-fast data transmission while powering devices over long distances. As human life is becoming more dependent on Internet Devices and especially industries, offices and homes are today mainly driven by equipment and tools that are powering the world by allowing them to access the virtual world through the internet, the popularity of PoE+ Switches will definitely be at an advanced level in future. AE Connect is one of India’s leading manufacturers of high-quality Connectivity and Networking Products. We have been able to build our credibility over the last 15 years with our best-in-class high performing products. Our infrastructure is equipped with advanced machines and appliances to deliver the networking products of the customer’s choice.

We work as a Digital Transformation Partner for all our clients. Along with our smart networking and connectivity products, there are a few other benefits of partnering with AE Connect such as all our products are customized to work in Indian conditions, massive power budget & superior performance of products, and 3 years warranty & extended warranty support.