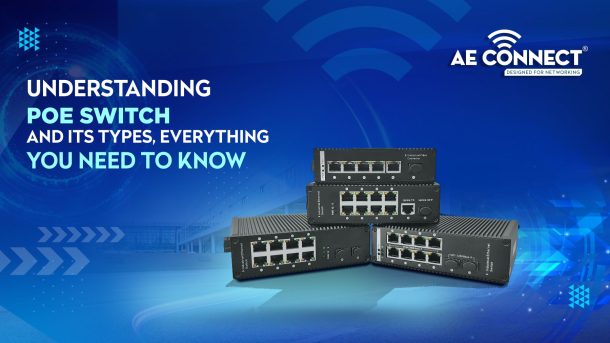 You probably know that Powered Devices (PDs) such as VoIP Phones, IP Cameras, Wireless Access Points (WAPs), etc. need both power and data to work. Pointing to the scenario when there was no PoE switch, there was a traditional way of using Non-PoE switches that only provided the data required for the powered devices. What about power? As stated earlier, power is also an essential factor when it comes to executing powered devices (PD). In that scenario, people using the PD had to connect another piece of equipment called a PoE Injector or other PSEs to a network, making networking a complicated process. To eradicate such hectic techniques in a PD networking system, PoE switches were invented.

A PoE switch is a PoE-compliant technology that provides both power and data to powered devices through an Ethernet cable. If your equipment is located in a place with insufficient outlets or network connections, PoE (Power over Ethernet) technology may be a viable option. PoE switches come in two different types: managed switches and unmanaged switches. Along with the increased use of gadgets comes an increase in cost and complexity. As a leading manufacturer of networking products in India, AE Connect offers cost-effective and high-performance managed and unmanaged PoE switches.

Control over the PoE network:

As the names indicate, the methodology of a managed switch differs significantly from an unmanaged switch. The ability to manage, prioritise, and control LAN traffic is made possible by a managed switch for the network administrator. Additionally, managed switches include enhanced capabilities that allow operators to recover data if the device or network fails. An unmanaged switch, on the other hand, is easy to use, functions similarly to a plug-and-play switch and enables powered devices to receive power and data without user involvement.

The following are frequently seen features in managed switches, although they might differ among manufacturers and models:

Whereas the MAC address table is a special feature of unmanaged PoE switches. Keeping a MAC address table reduces the total number of broadcasts transmitted, minimizing the probability of collisions inside the domain.

Unmanaged switches are equipped with basic security elements, such as a locking port cover, to provide fundamental security and prevent any sort of direct manipulation of the device. Managed network switches, in contrast, come with cutting-edge technologies that make it easier to spot live threats, quickly neutralise them, and safeguard data and control. Managed switches can configure security features that unmanaged switches cannot.  802.1X authentication, port security, and private VLANs are among the capabilities available in managed switches. AE Connect offers the most secured PoE switches, whether they are unmanaged or managed.

After reading the aforementioned points, you must have gotten an idea about the distinction between a managed and an unmanaged PoE switch. These switches, however, share some of the same characteristics, which are as follows.

What can the PoE switch power?

PoE switches are classified according to the standards that they support. You must be aware of the power requirements of your devices before picking your PoE switch. With the below information, you’ll be able to determine which standard and PoE switch the best meet your requirements.

Key factors to keep in mind when choosing a PoE switch:

When choosing the ideal PoE switch, strategic planning for organizational expansion and device usage is essential.

Before picking a PoE switch, it’s crucial to consider the network infrastructure and bandwidth, existing network equipment, present IoT, the locales of that equipment and IoT, the power setups and desired network system updates and extensions. These parameters will define the kind of PoE switch needed and whether converters or fiber optic transmission are required for improved bandwidth and long distances.

With the below points, you will get a fair idea of the important things to consider while picking a PoE switch.

How many ports the switch needs will depend on how many users the network has to accommodate; the larger the organisation, the more the ports needed. PoE switches typically include 8, 12, 16, 24, or 48 ports for Ethernet wiring and communication. Small or home networks often only need PoE switches with 8 to 16 ports. PoE switches of 24, 48, or more ports can accommodate the extensive and varied network system requirements of data centres, corporations, and large organisations.

The technical specifications of the switch must be capable of supporting the network sufficiently if it is continually moving huge amounts of data, and includes wireless devices, multiple printers, real-time services, voice-over-internet, etc. In that scenario, only managed switches need to be installed for the traffic to be prioritised and managed.

Along with the power used by the PoE switch, the overall power usage of all powered network devices must not exceed the operational capability of PoE switches. All powered network devices should be connected and powered at the same time, depending on the PoE switch’s port count and PoE switch type. With the proper PoE switch, data transmission can continue without interruption or signal loss. By carefully calculating the power budget, signal loss and power budget depletion can be prevented.

If the network and business are expected to expand, think about whether it will be more cost-effective to add new switches in the future, or whether one or two fully managed switches would likely be more beneficial over the long term since they can be manually configured and are more flexible.