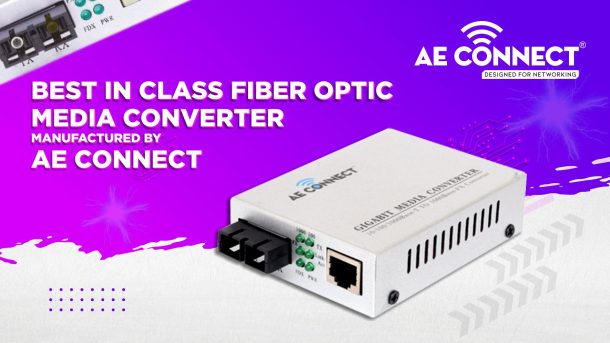 In order to connect copper and fiber, media converters are now widely used in a variety of businesses and sectors, including campus LANs, government defence, enterprise, and security surveillance. The media converter is the ideal installation choice for PCs, wiring closets, and data centres because of its traditional small footprint. Although the media converter’s application environment may differ, the cabling approach is essentially the same. Due to their affordability and flexibility in integrating copper infrastructure into a fiber-based system, media converters have gained a lot of momentum in recent years. They offer a remarkably easy method of extending the range that antiquated UTP copper cable is incapable of. Media converter, once primarily a LAN application, is now a common tool in many networking scenarios.

AE Connect manufactures fiber optic media converters that provide high performance at all times. So how can you use a media converter and link it to things like network switches, optical transceivers, fiber optic cables, and copper wires in the correct way? All will be explained in this article.

Media converters can improve your access’s power and quality while supporting a quick and reliable network speed. Additionally, they enable your network to grow beyond its present boundaries. Given that media converters are essentially two separate transceivers that exchange data.

Fiber-based media converters offer maximum capability at a reasonable price and are adaptable. With the aid of media converters, you and every other user on your network may complete jobs as quickly as possible. AE Connect delivers fiber optic media converters that offer a high-speed network.

You can link fiber optic systems to copper-based configurations using a media converter. This improves other products’ general usability and functionality.

The fiber optic media converters are adaptable and can be used in any setting, from desktops to industrial workstations. The architecture of a computer network is incredibly flexible thanks to these fiber optic media converters. They give you the option to switch to a better and maybe more powerful technology without having to completely redesign your network. A fiber optic media converter’s main use is to expand the network’s range. Media converters that use fiber optics may support cables that are significantly larger than those made with twisted-pair copper custom cables. The maximum distance for the 10M and 100M copper cables is 110 metres. After the setup, this length restriction is reduced to 90 metres for CAT5e cables, which is still allowable by industry standards. The fiber optic cable’s maximum length is 2000 metres, in contrast. Additionally, different optical fiber types have differential length limits. For instance, single-mode fibers may sustain lengths of up to 3000 metres. Media converters are used most frequently for converting twisted-pair copper cable networks to fiber optic cables.

The Necessity of a Fiber Optic Media Converter

Following are some justifications for adding fiber optic cables to your structured copper cable network:

A fiber optic system is comparable to a copper-based system in that the copper-based framework is being replaced by fiber optics. The distinction is that fiber optics uses light pulses rather than the conventional electronic impulses employed in the case of copper cables to generate a downstream signal through the fiber. Simply put, the two layers of the fiber optic cable’s differential refractive indices enable the signal to be transferred over great distances without experiencing high attenuation. With the creation and adoption of fiber-optic cable systems, a number of benefits have been proven. Compared to typical copper wire, optical fibers are more lightweight and smaller in size. This character has modified its functioning and chosen to use intrafloor conduits and duct space wiring. Optical fiber has the unique ability to cancel out electromagnetic fields. Light is used as the transmission vector in optical fibers, as was previously discussed. This suggests that it is resistant to all forms of electromagnetic interference, including voltage peaks and radio frequency. When installing cables near computers or industrial machinery, this is a crucial factor to take into account. Our fiber optic media converter enables faster transmission and cuts out major interference.

Optical fibers are imbued with the preventative measure of a fire hazard through light transmission. A visual transmission can never endanger an infrastructure with fire, unlike electrical transmissions. The low levels of attenuation of an optical cable are perhaps its greatest qualitative benefit. With the help of improvements in optical fiber transmission, this factor has been significantly reduced. An electric pulse gradually loses signal power as it moves down the length of the cable from the point of transmission. The signal needs to be strengthened at several points along the way to maintain its health. This prevents the signal from being lost before it reaches the receiver. In turn, this lowers the cost of fiber optic cables because they require fewer of these boosting devices than copper cables do. According to experts, optical fibers have the ability to provide a wide bandwidth. The capacity of a cable to convey information is its bandwidth. The amount of information that the cable can transmit in a specific amount of time and space is not more important than its bandwidth. 2.5 gigabytes per second is the highest bandwidth that has been recorded to date. Larger bandwidths than these are predicted to be possible with optical fibers once it is possible to separate light frequencies.