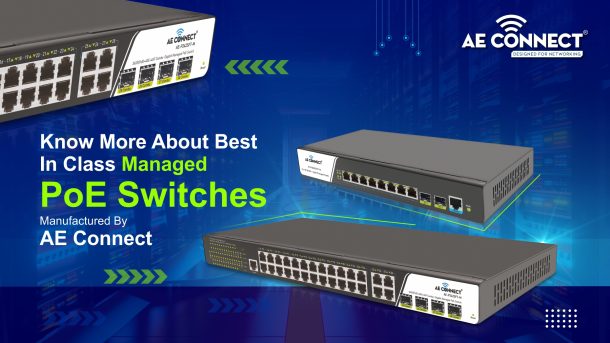 AE Connect manufactures managed PoE switches that not only allow you to control how your ports are configured but also how the data exactly travels, how fast it travels, who has access to that data, and the capability to fix network errors remotely. Managed PoE switches help data to get to its correct destination with maximum efficiency. Try to consider your budget, network size, speed, security, and configuration needs before selecting either a managed or an unmanaged PoE switch. A managed switch acts as the brain of your network, allowing you to build smart networks. You can always use AE Connect managed PoE switches where milliseconds count and security and remote accessibility are paramount.

Managed PoE switches serve advantages such as networking monitoring, administrative controls, and limited communication for unauthorized devices etc. The majority of military and industrial applications use managed PoE switches as they have a large network that requires oversight.

Any Unmanaged PoE Switch will suffice if you have a few devices and a small network that doesn’t require oversight. How does this affect your decision to use a managed PoE switch? Scalability. It is more cost-effective to focus on scalability rather than scrapping legacy systems if managed Ethernet switches are growing at a rate that indicates their performance is optimizing networks globally. The increase in speed and bandwidth of the infrastructure from 1 gigabit to 10 gigabits is pretty significant. A managed switch can be used as an unmanaged switch, but not vice versa. You have to consider managed PoE switches while setting up a network of IP cameras, networking your home’s smart devices and configuring the enterprise network. Managed PoE switches are known to provide major security as you can create access controls that keep threats at bay. AE Connect’s managed PoE switches allow you to customize your port configuration as required on your LAN so that you can get the best performance where and when you need it.

Adding failover redundancy to your network is one of the major advantages of managed switches. In addition, features like the Link Aggregation Control Protocol (LACP) allow the user to increase bandwidth for high-speed applications without having to change the cable type on the switch. When combined, these features of managed switches can create a network with low downtime and low latency.

It is also possible to lower IT costs by using a managed switch for operational expenses. Managed switches enable remote access and monitoring of your network, eliminating the need to maintain staff at remote locations 24/7 just to monitor network health.

Finally, managed switches can enhance your network’s security. You can also view the MAC address table on managed switches to see what devices and users have accessed your device. In this way, you can prevent any attempt at unauthorized access.

A layer 2 managed switch having 8 Gigabit RJ45 connections and 2 SFP slots is the AEAE-PS8082SFT-M. The 802.3af/at (PoE+) standard is supported by every RJ45 port, and a total of 120W of PoE power is available. The AE-PS8082SFT-M can provide high throughput to even the most demanding edge-of-network workgroups because of its extensive support for layer 2 management capabilities, and in small networks, it can serve as a backbone for gigabit switches and high-speed servers. Having two SFP slots increases network adaptability. The AE-PS8082SFT-M has a wide range of administration and security capabilities and is specifically created to meet the networking requirements of expanding enterprises. Small and medium-sized enterprises may afford these devices, which offer the best answers for a range of network settings. 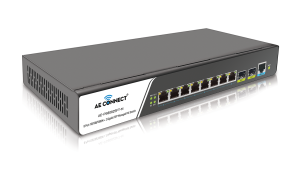 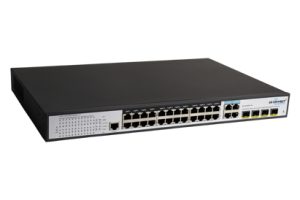 The model and manufacturer-specific features of Managed PoE Switches include Simple Network Management Protocol (SNMP), Spanning Tree Protocol (STP), Virtual Local Access Network (VLAN), Port Mirroring, and Bandwidth. Applications of managed PoE switches include both metro-wide transportation projects and those where mission-critical configurations and security are optimal needs, especially over fibre-optic networks that require remote management to control downtime. A managed switch allows access to one or more interfaces for the purpose of configuration or management of features such as Spanning Tree Protocol (STP), Port Speed, VLANs, etc.

It can provide you with more control over your LAN traffic and offer advanced features to control that traffic. You can place your equipment in awkward places with no power outlets available by using managed PoE switches. A managed PoE switch will allow you to transfer data and power at the same time over one Cat5e or Cat6 Ethernet cable. AE Connect provides managed PoE switches, which are mainly used with IP cameras, VoIP phones, and WAP (wireless access points).