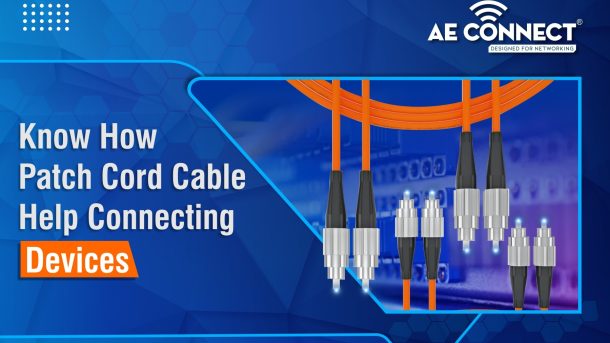 It is real. Our world is wireless today. The great majority of us use mobile gadgets every day that don’t need wires to be plugged into outlets to work. But it’s crucial to keep in mind that, strangely, all wireless devices eventually need wires. We need another way to charge our phones. If modems aren’t attached to electrical sockets, how else can we get Wi-Fi connections? Patch cord cables are used to connect devices of various types, such as switches connected to computers and routers. The AE Connect patch cord cable is durable and works in extreme conditions. When connecting end devices to power sources, a patch cord cable is a length of cable with connectors on both ends. Our cables are mostly employed for interconnecting electrical devices. They often have RJ45, TERA, or GG45 connectors on both ends and are made of copper. Any wiring that joins two electronic devices together, often in a network, is referred to as a patch cable. Computers and other gear could be included in these gadgets. Patch cables are also used in non-networked applications to transfer telephone, audio, and video signals between devices; these applications may involve tools like headphones and microphones.

The necessity for wires persists even in a world where wireless devices are popular and one of the cables that are most frequently used in our world is the patch cord cable. Any cord with RJ45, TERA, or GG45 connections on both ends is referred to as a patch cord or patch cable. They are utilized to attach an item to another object, typically a power supply. Although the phrase “patch cord” is occasionally used, it usually refers to cables that aren’t utilized for networks, like those used to connect stereo components.

The AE Connect Patch cables are designed to be more flexible than conventional stiff, bulky copper wires, setting them apart from other types of connections. Connectors are always present on both ends of patch cables. Patch cables provided by AE Connect enable system performance to run at the required high speeds and bandwidth and are essential for the operation of electronic and optical equipment. For signal routing, a patch cable joins two electrical or optical pieces of equipment. To “patch” a signal from one hub, switch, or router to another hub, switch, or router is typically done for network purposes. RCA or HDMI cables, which are frequently used to link home televisions to cable boxes, Blu-ray disc players, and stereo systems, can be utilized as patch cords. Our patch cord cables are frequently used by PCs and laptops to connect to wall outlets. Our patch cord cable can also be used to link a server or switch port to a structured cabling network.

Despite their similarities, the two are not identical. Patch cords are frequently used to link conventional devices to power sources, including telephones and audio/video equipment. However, they can also be used as Ethernet cables, which are frequently used to link computers, routers, and switches together to form a local area network. Ethernet is a protocol standard that establishes the rules for how data packets should be transmitted over a certain media. Traditional copper cables and fibre optic cables are the two types of Ethernet cables used most frequently. Category cables (Cat5, Cat5e, and Cat6) and twisted pairs or coaxial cables are also members of the Ethernet cable family. Although the shapes and plugs of the two cables are identical, Ethernet cables have eight wires and a larger plug than phone lines, which only have four wires. Phone cable ports are smaller than Ethernet ports, which accept Ethernet cables. The Ethernet card on the motherboard provides access to an Ethernet port on a computer. The lengths and purposes of the two also differ significantly from one another. In general, Ethernet connections are built for speed over long distances. In the field of cabling, these are frequently referred to as the “backbone” or “long haul.” Similar to Ethernet cables, fibre patch cables exist as well, such as LC fibre patch cables or Cat6 RJ45 patch cables. Additionally, AE Connect patch cables are frequently utilized in offices and wire closets for small distances. Our ethernet patch cable is important for building home computer networks because it may connect a computer to a network hub, router, or Ethernet switch.

Patch cords enable the serial connection between network devices, making it simple to update the network’s configuration without the need for punch-down blocks or patch panels. AE Connect patch cord cable establishes a network connection between the computer system, displays, printers, and data storage devices. Our patch cord cable is useful for connecting speakers, microphones, and audio mixers, among other pieces of audio equipment. As changing a patch cord is more practical or less expensive than fixing a damaged connector on the equipment, patch cords can be quite useful. For those setting up home computer networks, Ethernet patch cables are helpful. Sometimes patch cables are required by guests staying in older hotels without Wi-Fi to set up hard-wired internet connections. A particular kind of Ethernet patch connection used to link two computers together is called a crossover cable. Headphone extension cables, Microphone cables, RCA connections, XLR connectors, TRS phone connector cables, Tiny telephone connectors, patch panel cables, etc. are examples of non-networking patch cables. Additionally, there could be thick “snake cables” that send amplified and video signals.

Made With LSZH Technology

AE Connect patch cords are low smoke-zero halogens cables that are made with a special thermoplastic jacket. This kind of insulation is particularly flame-resistant due to the use of thermoplastic or thermosetting materials. Most frequently, LSZH materials are employed in situations where reliability and fire safety are crucial. LSZH cables are perfect for restricted places where inadequate ventilation could be a significant issue. When exposed to flames, the low-smoke jacketing material LSZH emits very little to no smoke. When subjected to high temperatures, it is made of thermoplastic compounds that emit either no or very little white smoke. LSZH cables offer superior flame retardancy along with great electrical and physical insulation qualities. Since LSZH cables’ jacketing does not contain halogens, burning them results in substantially less dangerous gas and chemical emissions. When the sheathing material is subjected to high temperatures, certain gases are still emitted, but they are not harmful and do not cause corrosive fumes. Another advantage is that the materials used to make LSZH cables are safe for the environment.

You could find LSZH cables beneficial because of their added lifespan and safety features.

Reduce the spread of fire

Your wires will fare better in a fire if they have LSZH jackets. More fire protection should be built into the jacket. Additionally, if you purchase a high-quality item, the material may also feature self-extinguishing qualities. Even if a cable caught fire, it shouldn’t contribute to the fire’s growth and its own flames should go out after the fire’s origin is put out.

When burned, cables that produce or contain halogens will emit a lot of noxious smoke that is black and dense. They may also release harmful fumes and vapours. People may be unable to leave the region because of smoke and poisonous materials. They can be experiencing some bodily discomfort and be unable to see a way out. If LSZH wires catch fire, they pose no threat to the environment. They will produce some smoke, but it will be less dark and dense. It will be transparent to people. Additionally, these cables don’t produce or contain halogens. Thus, they won’t release any harmful fumes or vapours. Any nearby residents can concentrate on putting out the fire or escaping the building.

Connectors are always installed on a patch cord’s ends. Pigtails, an informal term for a cable that has bare wires (or bare fibre) at one end and a connection at the other, are comparable to patch cords. These cables are frequently referred to as blunt patch cords in the context of copper cabling. The unconnectorized end (sometimes known as the “pigtail”) is meant to be permanently attached to a terminal or component. Contrary to copper pigtails, optical fibre pigtails are more appropriately referred to as connectors than cables or cords. A fibre pigtail is a single, brief, optical fibre that is often tightly buffered and has an optical connection already placed on one end. AE Connect patch cord cables are frequently formed of coaxial cables with a shielded core that transmits the signal and a wire mesh covering the core that transmits the electrical ground or earthed return connection. The cable is equipped with connectors at each end, allowing the cord to be plugged in. There are many different connector types, especially when adapting cables. The AE Connect patch cord cables come with a strain relief boot design and have a UTP plug with polycarbonate housing for durability, making them the ideal choice.