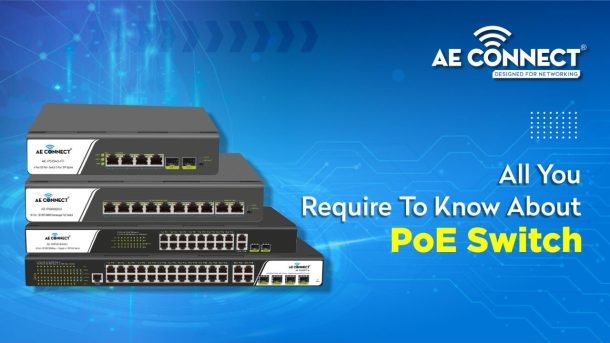 Power over Ethernet (PoE) is a technology developed for the purpose of passing electric power along with data on twisted pair ethernet cabling. Many devices such as Wireless Access Points (WAPs), Internet Protocol (IP) cameras, and Voice over Internet Protocol (VoIP) phones require a single cable that can provide both data connection and electrical power. A PoE switch saves both time and money by delivering data and power over the same ethernet cable for the local area networks (LANs). The IEEE 802.3af standard defined PoE technology in 2003. The PoE switch is a major application of PoE technology that has made a remarkable contribution to simultaneous data and power supply over a single ethernet cable. The rise of the Internet of Things (IoT) has led to the development of projects such as smart cities, intelligent homes, etc. The PoE switch has vast growth potential and finding one that suits the work aspirations is a must as well as a difficult job. Making it simple to get robust PoE switches, AE Connect provides managed and unmanaged PoE+ Switches at an affordable price range.

Many times, you need to position the network set up in areas where a power outlet is not available. PoE switches can supply both power and data in such situations using ethernet cables. Devices such as Internet Protocol (IP) cameras require fast internet and a power outlet to perform at high resolution. We manufacture PoE switches that can cater to the needs of devices such as IP cameras. The Internet has become a basic necessity in the current hour and we need more things such as wireless access points. Wi-Fi services are coming up in more and more places such as airports, railway stations, universities, marketplaces, etc. The need of the hour is the PoE switch which can provide data and power to the wireless access points. Large corporates use many VoIP phones that require internet connection and power. A networking product PoE switch serves corporates by providing data and power simultaneously to VoIP phones over ethernet cables.

AE Connect provides unmanaged Power over Ethernet (PoE) switches which are basically plug-and-play devices without remote configuration, management, or monitoring options. The commercial and industrial unmanaged PoE+ Switches that AE Connect offers, boast a variety of port counts, mounting, speed (including 10 Gigabit), and fiber. The PoE+ Switch distributes power at 30 watts per port, which is capable of delivering fast data transmission while powering devices over long distances. Our PoE+ switches come with industrial-grade design and can provide surge and static protection at all-time ensuring consistent operation in irregular and harsh conditions. In order to streamline your management and maintenance practices, deploy Unmanaged PoE+ Switches.

The highest-quality, fastest network IC and most reliable PoE chip are both used by the AE-PS104G-FF. The series of PoE Switches can be 10/100M Ethernet and each PoE port complies with the 802.3af/802.3at standards. The network offers a stable connection, and the IEEE802.3af/IEEE802.3at-compliant powered devices can be immediately detected and powered via the PoE power port. It aids users in creating a high-performance, secure network. It is mostly found in user networks’ core or convergence layers, which include industrial parks, structures, industries, mines, government organizations, and residential broadband.

A gigabit Ethernet PoE unmanaged switch with a small form factor, the AE-PS8082GU is intended to improve network performance. The switch has 8 IEEE 802.3af/802.3at compatible 10/100/1000 Mbps Ethernet PoE ports. Using the existing Ethernet cable and the PoE ports, devices compliant with IEEE 802.3af and IEEE 802.3at can be powered. To provide dependable data transfer, the switch uses store and forward packet switching technology.

A 16FE+2GE+1SFP Ports unmanaged switch with 16 PoE ports, the AE-PS16N2C requires no configuration. The switch offers a simple method for growing your wired network.

The switch provides an easy way to expand your wired network. Since auto-MDI/MDIX is supported by all 19 ports, cable selection is not a concern.

Including 2* 1000Mbps Uplink, 16* 10/100/1000Mbps PoE+, IEEE802.3af/at-compatible ports, and 2* Gigabit SFP ports. The AEIN-PSG1604GU PoE+ switch offers a maximum power budget of 200W and 30W for single PoE+ ports, respectively. This enables customers to design a variety of networking products. The PoE+ ports have the ability to protect the PoE+ Switch from lightning strikes and other electrical surges by reaching 6 KV surge protection, providing dependable performance even in some challenging conditions.

The product AEIN-PS24FE2GC has 24 IEEE 802.3af/at compliant 10/100Mbps PoE ports, 2 1000Mbps uplink ports, and 2 SFP ports. The PoE switch allows customers to configure a variety of Networking devices since it provides a maximum power budget of 300W for single PoE ports and 30W for dual PoE ports. The PoE Switch Series may provide more flexible options for long-range transmission in extension mode, extending the distance up to 250m, which considerably aids in offering a better user experience.

The popularity of managed PoE switches is on the rise among network users. The managed switch provides all the features of an unmanaged switch, making it a natural choice for people. The advantages of the managed switches are administrative controls, network monitoring, limited communication for unauthorized devices, etc. A managed switch transfers data and power at the same time over one Cat5e or Cat6 Ethernet cable.

A layer 2 managed switch having 8 gigabit RJ45 connections and 2 SFP slots is the AEAE-PS8082SFT-M. The 802.3af/at (PoE+) standard is supported by every RJ45 port, and a total of 120W of PoE power is available. The AE-PS8082SFT-M can provide high throughput to even the most demanding edge-of-network workgroups because of its extensive support for layer 2 management capabilities, and in small networks, it can serve as a backbone for gigabit switches and high-speed servers. Having two SFP slots increases network adaptability. The AE-PS8082SFT-M has a wide range of administration and security capabilities available and is specifically created to meet the networking requirements of expanding enterprises. Small and medium-sized enterprises may afford these devices, which offer the best answers for a range of network settings.

PoE technology has been credited with improved data speed. A PoE switch can deliver data at 1Gbps using Cat5 and Cat6 cables. The all-new IEEE 802.3bz standard provides speeds of 2.5Gbps to 5Gbps over 100 metres with an immediate view toward 10 Gbps. The maximum requirement for live streaming is 400Mbps. You can easily manage streaming videos and perform other functions such as checking emails.

PoE eliminates the requirement for tethered electrical outlets which means devices such as security IP cameras and wireless access points can be located according to their needs and repositioned with ease. You can add devices in remote or awkward locations with the help of PoE Switch. A PoE switch acts as a safer alternative as it protects network equipment from electrical overload, under-powering, or incorrect installation. AE Connect manufactures PoE switches that make the installation and distribution of network connections simple and effective. Our PoE switches can be backed up by an uninterruptible power supply or controlled to quickly disable or reset devices. Now you can expand a network even when power is problematic.